BMW is celebrating the 50th anniversary of its M division with a series of special events and tributes. One such tribute will be sold only to US And Canadian customers, the 2023 BMW M3 Edition 50 Jahre BMW M – that’s the car’s full name.

Limited to just 500 examples, the special edition is based on the 2023 BMW M3 Competition xDrive and its marquee feature is the special paint colors in which it will be offered. Celebrating the history of the brand, the colors were taken from M3s of all previous generations.

the model will be offered in Cinnabar Red, which honors the E30 M3; in Techno Violet, to evoke the E36 M3; in Deep Interlagos Blue, which was borrowed from the E46 M3; in Fire Orange III that was featured on the limited edition Lime Rock Park Edition of the E92 M3; and, finally, in Limerock Gray, as a reference to the F80 M3 CS. Two of the colors, Techno Violet and Interlagos Blue, were revived exclusively for this special edition model, BMW said.

Beyond the selection of paint colors, the M3 Edition 50 Jahre BMW M comes with Style 826M forged wheels that are finished in a sleek matte Orbit Gray finish that isn’t available on the standard M3. They fit around standard brakes available with red, blue, or black calipers, or M Carbon Ceramic brakes that come with gold calipers.

In addition, the model gets a carbon fiber front splitter, signature M quad tailpipes trimmed in carbon fiber and titanium, while the trunk leader spoiler is made of carbon fiber to match the carbon fiber roof.

As a nod to its forebears, the special edition boasts Classic BMW M Motorsport logos on the hood, the trunk, and the wheel center caps instead of the usual BMW roundels. The logo is made up of staggered semi-circles in blue, navy, and red, which is reminiscent of the BMW M GmbH logo that was first used on race cars in 1973. 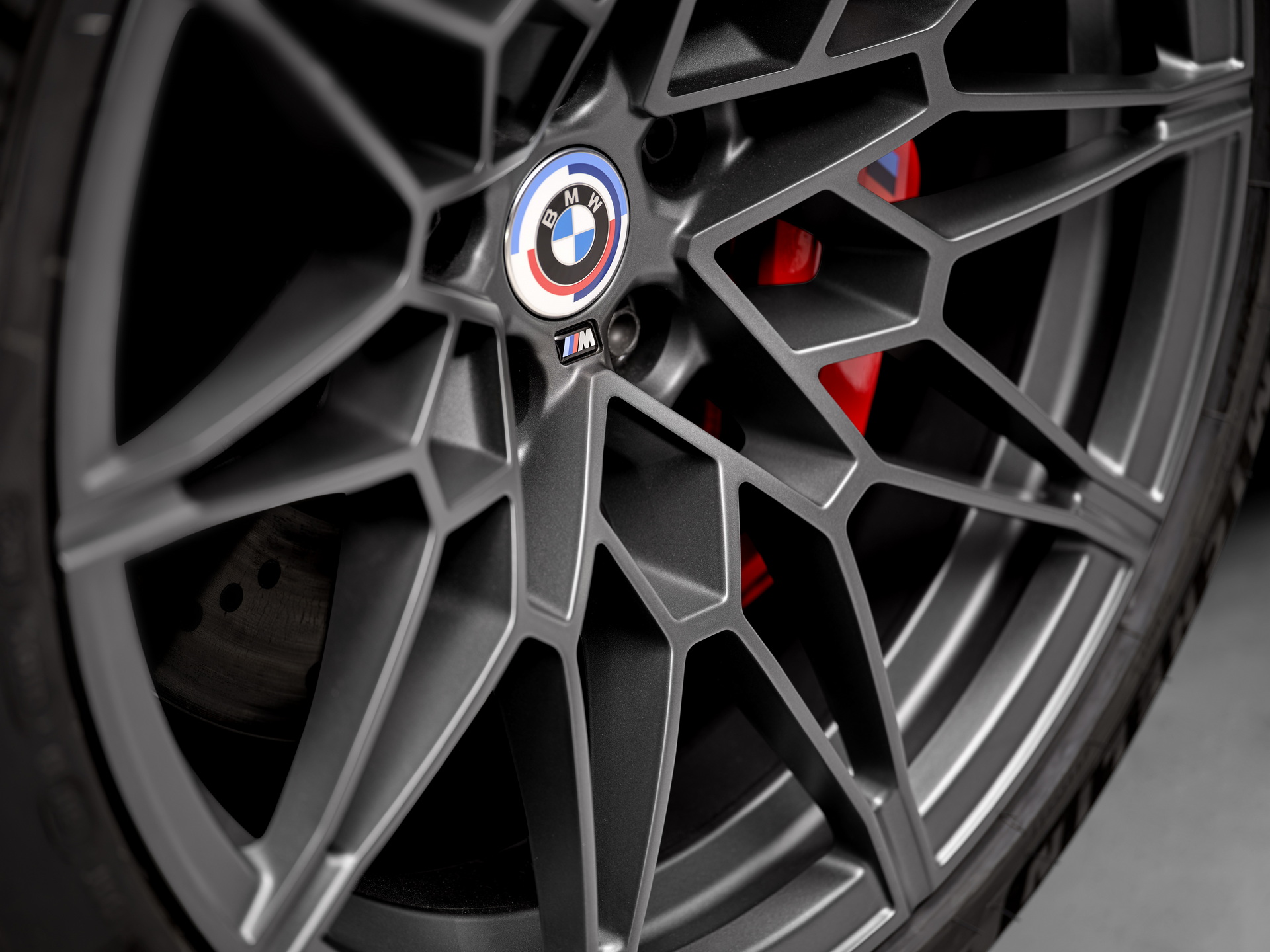 Moving inside, owners will be greeted by “Edition 50 Jahre BMW M” lettering on the door sills, which is again repeated on an aluminum plaque on the cupholder cover. That plaque also features a production number, marking it out as 1/500 being made.

Drivers will be kept firmly in place during hard cornering thanks to standard M Sport seats, though the M Carbon bucket seats are also available and they’re upholstered in Black Extended Merino leather, a unique option for this model. No matter which seat you pick, the stitching will also be exclusive to this model, featuring the three colors of the M logo. 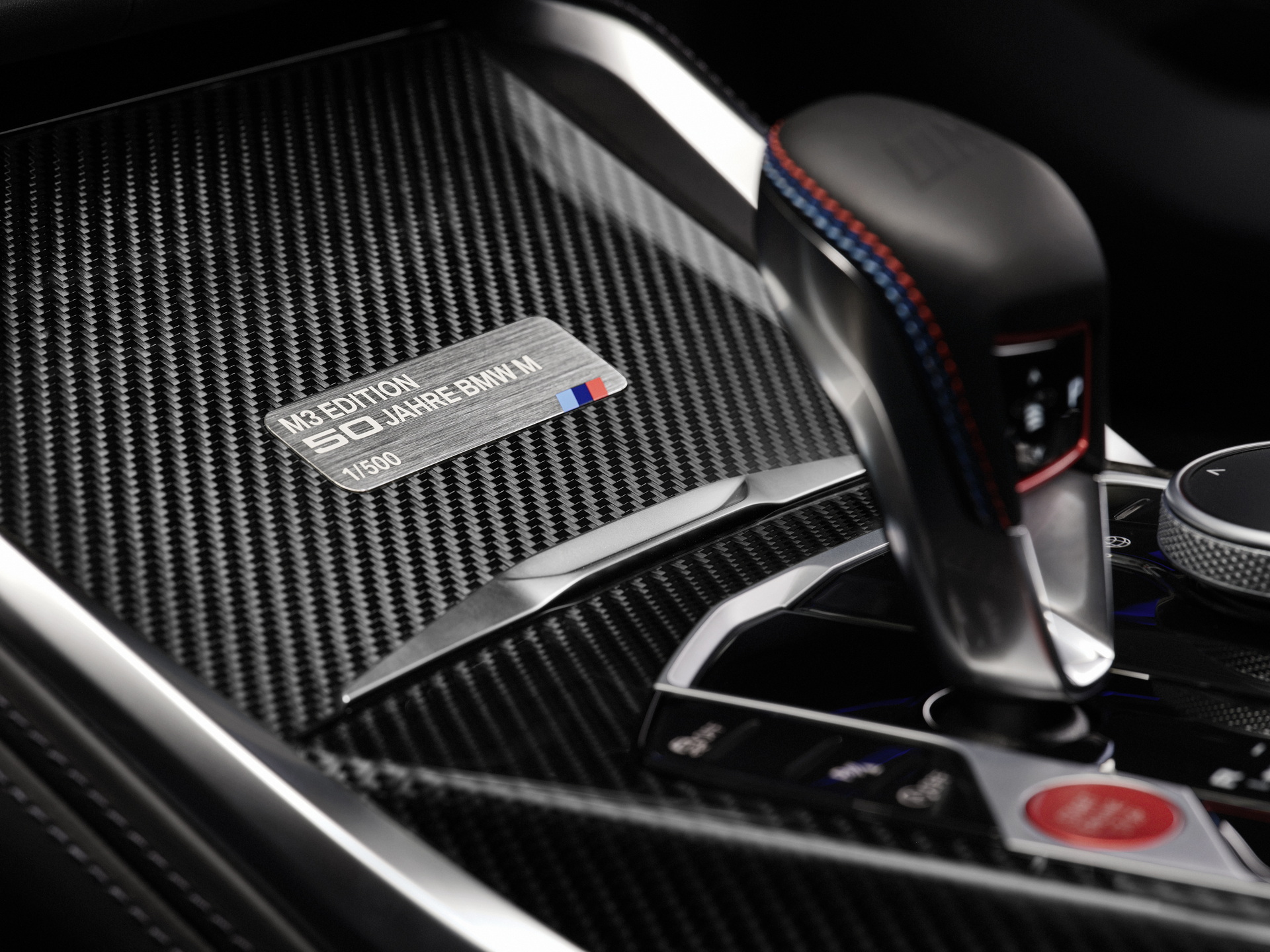 The model will also get BMW’s new curved display screen ( a standard feature on all 2023 M3s) as well as a the eighth generation of BMW iDrive. The setup combines a 12.3-inch instrument cluster behind the steering wheel and a 14.9-inch infotainment screen, which appear to be made up of a single piece stretching across the dashboard. The new feature has previously been previewed for Europe but this is the first confirmation that it will also be coming to the US market this year.