Warning: This post contains spoilers for Thursday’s Atlanta to the final.

Atlanta‘s European tour ended in Paris this week… and wrapped up Season 3 with a truly “WTF” moment.

Thursday’s finale centered on Van, who ran into her friend Candice — remember her from the party at Drake’s house in Season 2’s “Champagne Papi”? — While in Paris living her best life as a carefree, amelie-esque ingénue, French accent and all. Van led Candice and her friends on a wild adventure that involved a savage beating by baguette, a dinner of fried human hands and… Alexander Skarsgard, somehow? But when Candice finally confronted her, Van tearfully admitted she was just trying to reinvent herself after falling into a serious psychological funk.

It answered a lot of questions viewers had about Van this season — and the Atlanta writers had the same questions, executive producer Stefani Robinson (who wrote the finale) tells TVLine. They knew they wanted to bring Van along to Europe with Earn, Al and Darius, but “the question was: ‘OK, what is she doing here?’” So they came up with an idea: “What if she was going through some sort of existential crisis, a mental breakdown, a crisis of identity? And we showcase that in a set piece that is sort of funny and whimsical, but then obviously takes a darker turn.”

Bringing Candice back was a way to highlight how much Van had changed, Robinson notes, because in “Champagne Papi,” Van was the one tagging along with Candice. “That reversal is so great because it’s such a reversal of just how we see Van in general, and of most of the female relationships that she’s been in,” she points out, citing Season 1 episodes like “Value” and “Juneteenth” where Van took a backseat. Here, “she’s in control, and she’s the one finally making these decisions and going on this wild goose chase and [living] a very interesting life. We haven’t seen her in that way.”

We haven’t seen Skarsgard in quite this way before, either, dancing to Ashanti and, um, enjoying Van’s newfound confidence. “We had a list of dream people who would be able to fill out the role, but he was definitely at the top,” Robinson remembers with a laugh. “He just really threw himself in there… It didn’t seem like he was shy about doing what was written. If anything, he added more to it.”

Fans may have expected the finale to focus on Earn, Al and Darius, and Robinson admits she didn’t know this episode would be the season finale while writing it. But it “brings some sort of finality” and “answers these questions that we’ve been having all season,” she believes. “Van is going through what we’re exploring this season, with the idea of ​​being away from home and stepping outside of your comfort zone… This season, we were interrogating: What does it mean to be Black? What does it mean to be American traveling abroad? What does it mean to be a white person in America” during the current racial reckoning? “So I think there is something nice and final about the Van of it all. It’s finally being able to say, ‘I don’t know who I am.’ And: ‘Is that OK?’… In that way, I feel like it sums up the season quite well, I think.” 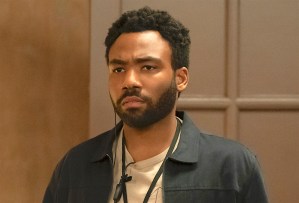 We did actually see Earn, though, in a post-credits scene where he received a piece of lost luggage that wasn’t his and looked inside it to find a framed photo of a white man with his family. Yes, that’s the same white guy who was in the rowboat in the season premiere, and also the guy who killed himself in Season 3’s reparations episode, Robinson confirms. This season’s standalone episodes may “seem to exist on some dream-like plane,” she says, but connecting it back to Earn’s story shows that “the stories we’ve been seeing actually can be very real. There’s some crossover here. These bottle episodes aren’t so random, the way that a lot of people are reacting to them… They exist as the sort of subtext of everything that we’re seeing.”

Yeah, about those reactions: Season 3’s standalone episodes have been polarizing with fans, putting Atlanta‘s main trio on the sidelines for five of the 10 episodes — fully half the season. But “even if it feels chaotic and random, I think there is some intention behind it,” Robinson assures us. Series star and creator Donald Glover has “said that each season is like an album,” she adds. “I think that’s a great way to look at the Atlanta seasons. Each episode has something to do with one another, but can also feel like its own singular thing… They play against each other and inform each other.” She sees that final scene with the framed photo as “closing the chapter” on Season 3’s story: “It’s very eerie, but I think a great bookend.”

What do you think, Atlanta fans? Grade the finale — and Season 3 overall — in our polls, and hit the comments to share your thoughts.