When Elon Musk first said he planned to buy Twitter I told people it wasn’t going to happen. Within the first 48 hours he was breaching the terms of the agreement by publicly criticizing the company and its general counsel. Now he’s blasting out proprietary information about bots. At every turn he’s trying to wiggle out of this deal that made little sense to begin with and became downright foolhardy when Tesla stock tanked and cryptocurrency fell off a cliff — two major prongs of Musk’s wealth.

Maybe he can ultimately pull this off, but at this point the deal seems destined for litigation.

And with that in mind, Musk seems interested in building out his own little in-house law firm. Which he’s setting up by posting on Twitter… of course.

Tesla is building a hardcore litigation department where we directly initiate & execute arguments. The team will report directly to me.

No better way to find exceptional legal talent than asking for 3 to 5 bullet points. Why is Musk building his own firm? Mostly because he’s sick and tired of outside counsel refusing to be bullied by a man-child. 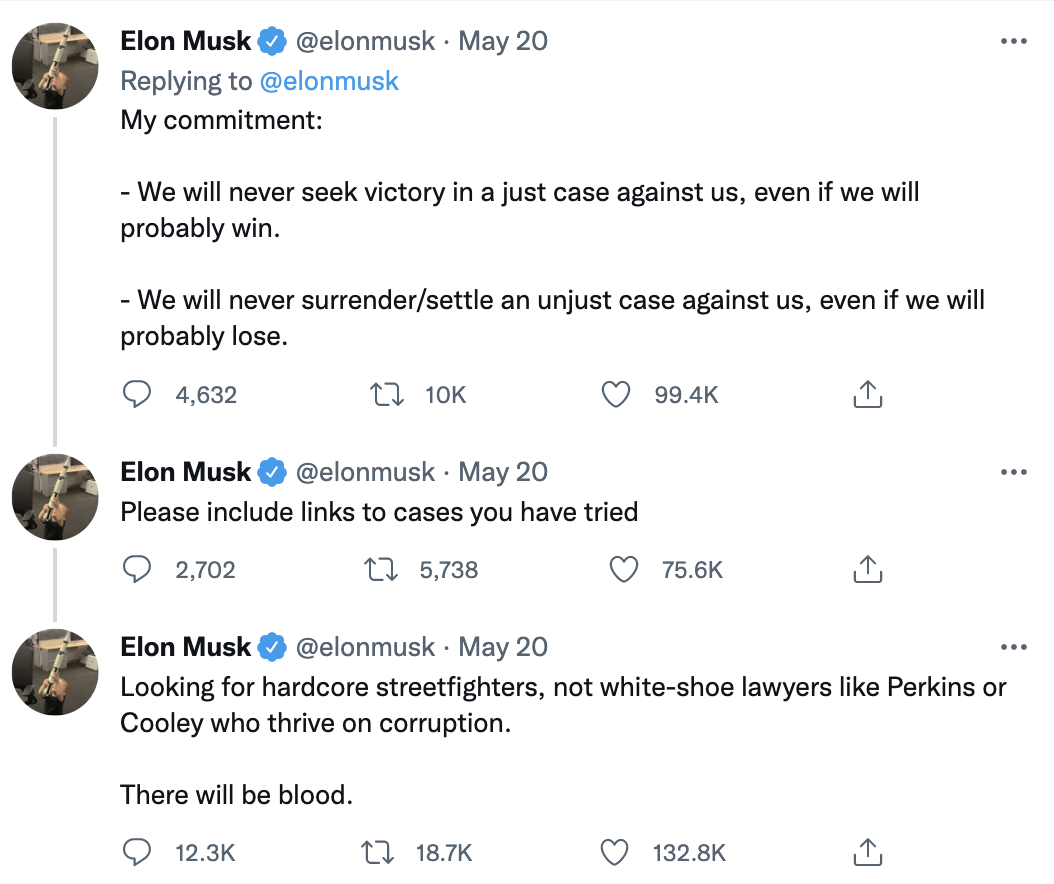 So does this mean the sexual harassment against him were completely true? Because he seems to have settled those. That’s why you don’t go around saying stuff about refusing the settle unjust cases.

He calls out Perkins because it’s so deeply connected to the Democratic Party that and Musk’s fanboys are all breathing in the John Durham delusions about Perkins sitting at the center of an elaborate plot against Donald Trump. Cooley, on the other hand, famously sided with its associate after Musk threatened to pull his business from the firm because the new associate had investigated Tesla while working at the SEC.

Neither firm is particularly “white-shoe” but whatever.

“There will be blood.” How does anyone take this guy seriously?

Joe Patrice is a senior editor at Above the Law and co-host of Thinking Like A Lawyer. Feel free to email any tips, questions, or comments. Follow him on twitter If you’re interested in law, politics, and a healthy dose of college sports news. Joe also serves as a Managing Director at RPN Executive Search.