After joining the $1 trillion market capitalization club at the end of 2021, shares of electric vehicle (EV) juggernaut Tesla (TSLA -9.91%) have shifted into reverse. Between macroeconomic headwinds like 40-year-high inflation, the Fed’s consequent move to raise interest rates, and concerns about the war between Russia and Ukraine, the stock market has been in quite the frenzy.

Many high-growth stocks, Tesla included, have been humbled lately as investors seek protection by shifting their attention to value companies and safer assets. CEO Elon Musk’s move to potentially acquire twitter (TWTR 0.72%) certainly hasn’t aided the company’s case, either. With uncertainty around whether or not the deal will actually close, investors have raced to dump shares of the EV leader.

But in terms of fundamentals, Tesla continues to look dominant. The company is rapidly expanding its business on all fronts and has strengthened its balance sheet and cash generation in the process. With the stock down almost 40% year to date, should investors pull the trigger on buying Tesla today?

In a quarter when investors weren’t sure what to expect due to COVID-19-related shutdowns at Tesla’s Shanghai factory, the EV leader delivered, and it delivered big. The company’s $18.8 billion in total sales, which climbed 81% year over year, beat Wall Street expectations by $918 million. Likewise, its non-GAAP earnings per share of $3.22, equal to 246% growth, crushed consensus estimates by a whopping 42%.

To top off a record quarter, the Musk-led enterprise grew total production and vehicle deliveries by a respective 69% and 68%, producing 305,407 vehicles and delivering 310,048. Per management’s guidance, investors can expect the company to achieve 50% average annual growth in deliveries over a multi-year time horizon. In fiscal 2022, analysts are modeling a top line and adjusted bottom line of $86.5 billion and $12.32/share, translating to robust year-over-year ascents of 61% and 82%, respectively.

Amid such incredible growth, the company’s balance sheet and cash generation are equally thriving. In its latest quarter, the EV commander revealed that total debt excluding vehicle and energy product financing fell below $100 million. The company is manifesting the “cash is king” mantra as well: In the first quarter, free cash flow surged an astonishing 660% to $2.2 billion. Provided that the global EV market is projected to expand at a compound annual growth rate (CAGR) of 25% through 2028 to nearly $1 trillion, it could be said with exceedingly high confidence that Tesla is poised for more success in the coming years.

Even without context, though, Tesla’s valuation is extremely high. The stock is trading at 98.2 times earnings at the moment, an extremely lofty multiple even post-correction.

Comparing the EV behemoth to other automobile manufacturers further underscores its expensive stock price. As seen in the below chart, competitors General Motors (GM -3.54%), Ford (F -4.32%)and Toyota (TM 0.74%) have price-to-earnings multiples of 6.2, 4.6, and 7.9, respectively. Whether or not Tesla deserves a premium valuation is a frequent debate among the bulls and the bears. However, it’s rather indisputable that the EV stock is richly priced. It would take a major share price collapse for Tesla to truly be considered cheap. 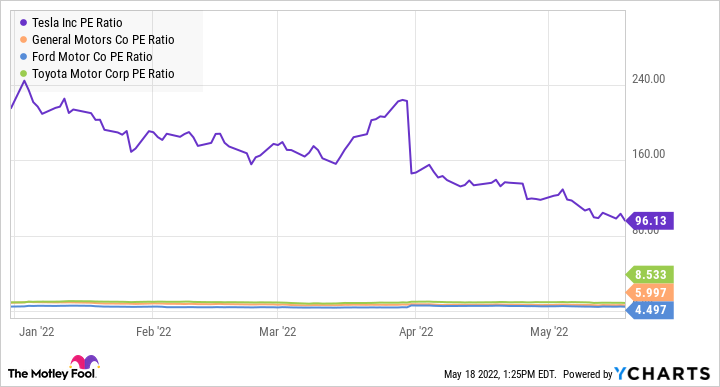 Should investors buy the stock now?

Tesla’s pullback has certainly grabbed my attention — the company is the unequivocal pacesetter in the EV market, an industry that is still in the earlier innings of development. That said, the company’s valuation isn’t exactly attractive yet, and it would take far more downward pressure to make the stock appear cheap. Investors should keep a close eye on Tesla moving forward, as there’s surely a chance it’ll continue on a downward path in the periods ahead.

While it’s a fantastic company and a sure winner in the EV space, I don’t suggest buying the stock just yet. Take advantage of the recent tech sell-off and look for other companies that carry more enticing valuations today.