NYC restaurateurs say they missed GrubHub’s warning about a free $15 lunch promotion that saw them overwhelmed with orders before being forced to dump tons of food.

The meal delivery app told the Today Show that it did offer restaurants ‘advance notice,’ but that the demand blew away expectations as thousands of hungry New Yorkers ordered away. At its peak, up to 6,000 customers a minute were making orders, with a video that emerged Friday showing a restaurant’s printer belching out scores of orders as stunned staff looked on.

However, restaurant owners are saying they didn’t get any notice and their kitchens and staff were overwhelmed with so many orders they couldn’t fulfill them, and even if they could, there was no one to deliver it.

GrubHub’s free lunch promo – which ran from 11am to 2pm – forced restaurants to throw out thousands of meals because delivery drivers could not meet the high demand of orders on Tuesday.

The promotion was so popular that at one point GrubHub was averaging 6,000 orders per minute, GrubHub told DailyMail.com in a statement.

New York City restaurant owners were overwhelmed with orders on Tuesday during Grubhub’s $15 free lunch promotion, which many kitchens being flooded with food tickets (pictured). Owners claim weren’t warned about the promotion and their businesses from short staffing, no delivery drivers, and wasted food 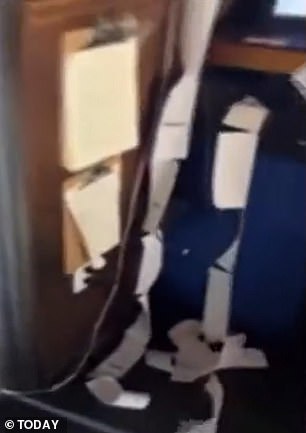 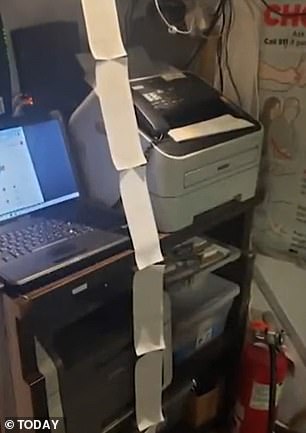 Grubhub claimed in a statement to the Today Show that it did warn restaurants prior to the promotion, but did not expect New Yorkers to make 6,000 orders a minute

The huge amount of orders even ‘temporarily overwhelmed’ the app, but the glitch was quickly resolved, GrubHub spokesman Christopher Krautler told MarketWatch.com

Adding that the promotion ‘ultimately [helped] to drive increased business for the thousands of restaurants still struggling from the pandemic.’

‘We saw an unprecedented amount [of orders]more than we’ve seen before with any promotion,’ he said.

Multiple restaurants across the city were scrambling on Tuesday, including Blue Ribbon Fried Chicken in Manhattan.

A manager from the restaurant told DailyMail.com that the promo code led to things getting chaotic yesterday, saying: ‘It was a disaster [on Tuesday].’

‘We didn’t know. We didn’t have a heads-up about this promotion,’ a manager at Veselka, a Ukrainian restaurant in the East Village, told DailyMail.com Tuesday. 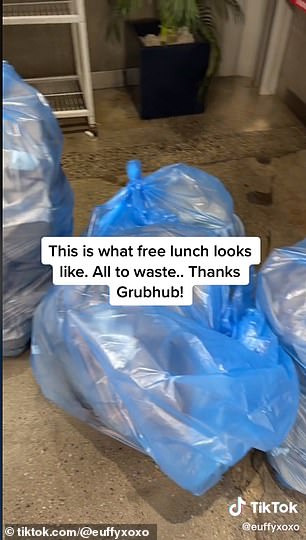 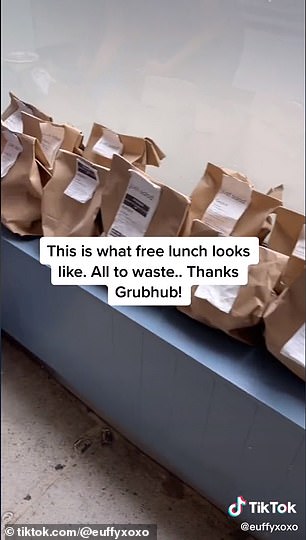 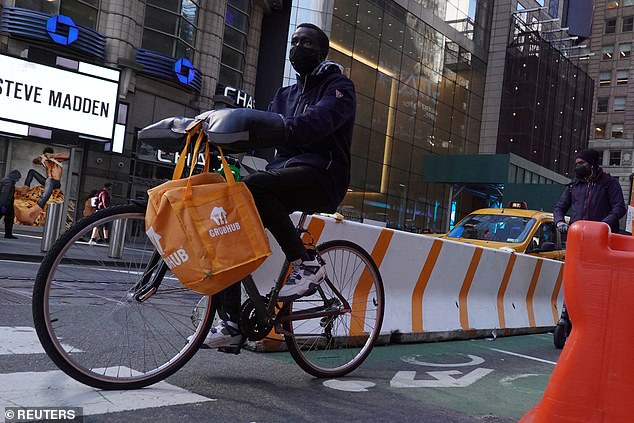 GrubHub’s promotion was so popular that the delivery service was averaging 6,000 orders per minute on Tuesday, overwhelming delivery drivers and restaurants

‘The drivers could not get here. We had the orders ready to go but there were not enough delivery drivers. [Customers] called very frustrated, understandably so, and at some point, we stopped taking GrubHub orders,’ the manager added.

At a Mexican restaurant in Harlem, a worker named Lily told Buzzfeed that because the restaurant’s delivery driver couldn’t keep up with demand, she was forced to order an Uber herself and hand-deliver 11 orders.

‘INSANITY,’ she told Buzzfeed of every day.

Brandon Ching, who was working the counter at Greenberg’s Bagels in Brooklyn, expressed the same sentiment, telling Buzzfeed: ‘It got overwhelming’

‘We were short-staffed today so it really added extra stress to my day,’ he added. 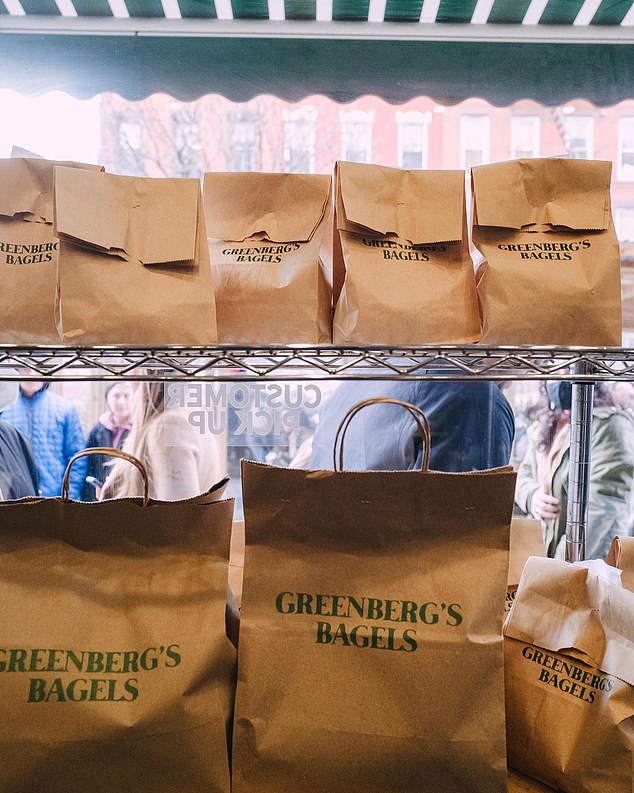 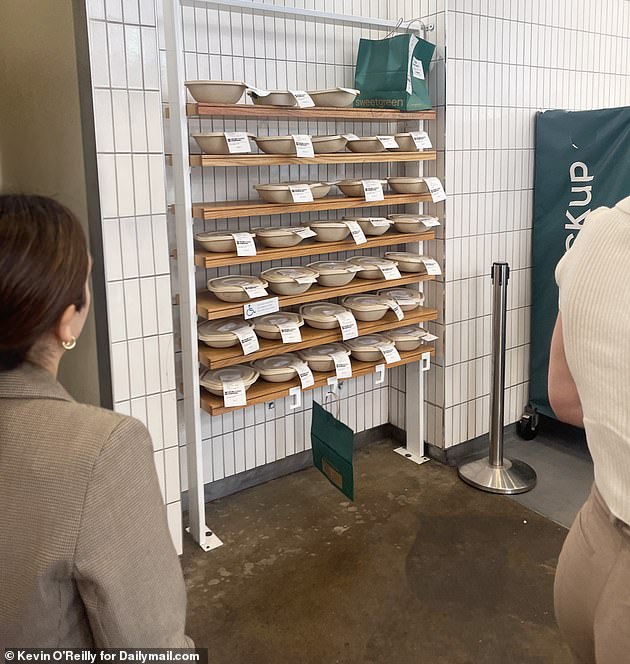 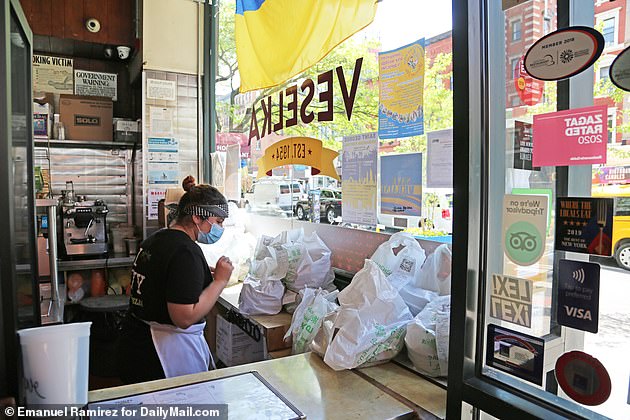 VESELKA, EAST VILLAGE: A manager at Veselka told DailyMail.com they had to stop taking GrubHub orders because they were not notified of the promotion and did not have enough delivery drivers

But some restaurant owners found a way to adjust to the madness, including Richie Romero, one of the owners of Zazzy’s Pizza in Manhattan.

He told MarketWatch his lunchtime business was 30 times busier because of the promotion and 45 minutes after the deal expired he was still delivering orders.

Romero said he even had to bring extra staff in to handle the influx of orders.

‘It was monstrous,’ he said of the uptick of orders, but he added that he anticipated that the promotion would lead to a host of new customers in the future.

The intense amount of orders in a city of 8million left restaurant owners and delivery drivers were overwhelmed, with some saying they were simply not equipped to meet such a high demand of orders.

A TikTok by user euffyxoxo appears to show dozens of abandoned orders at a Just Salad restaurant that were never picked up.

‘If you’re wondering what free lunch looked like in NYC this afternoon…. All this food gone to waste!’ she captioned the video.

Customers themselves were shortened by the chaos, with some forced to wait hours for their food and others just having to cancel their orders altogether.

Hundreds of frustrated New Yorkers took to Twitter on Tuesday to air their frustrations.

‘Two people who need to be fired today – the marketer whose idea this was, and the social media manager who decided on this cheerful a** message knowing the total chaos it caused to the restaurants and the customers,’ Alyson Cadena tweeted.

Another user wrote: ‘… so gross, some multi-million dollar corporation trying to be ‘relatable’ to NYC’ers mentioning the Rangers, as they ignore thousands of complaints about their janky app and bs promo today lol.’

Among the angriest complaints were Manhattan office workers who claimed their whole office missed lunch after placing group orders.

‘[Bull]sh**. I ordered over an hour ago. Still not here and the restaurant is closed now. Been on the phone and chatting for over an hour. Y’all scamming,’ one tweeter user accused the app.

‘My workplace placed an order for us to be delivered at 12:30. We didn’t know there was a promo in place. It is now 3:45 & I am hungry AF. I work in the Navy Yard- walking to go get lunch would take up my entire break.’

GrubHub launched the offer after conducting a survey that found that 81 percent of ‘full-time employees in New York value lunch more than they did pre-pandemic,’ but find it difficult to take a break in the middle of the day.

According to the survey, based on a sampling of 1,000 New Yorkers, those who answered said they often don’t take breaks because they are busy during traditional lunchtimes.

It also found that 60 percent of those surveyed thought taking a lunch break helped them reset during a hectic workday.