It has been only nearly two months since the Mishras of TVF show Gullak took us into the heart of small-town India and their bittersweet struggles and wins. Relatable and real, the show managed a tightrope walk between what is personal and universal for the fourth season in a row. Now, TVF’s another masterful presentation, Panchayat Season Two, streaming on Amazon Prime Video, gives dollops of lived-in moments and a heart-warming experience that is bound to stay with the audience long after they have watched it.

The same village, the same actors, and the same theme music, but nothing that feels humdrum — that’s the beauty of Panchayat 2. You get as emotionally invested in the lives of the residents of the village, Phulera, as you were in the first season. And, there are enough laughs on the way.

The first season of Panchayat, with eight episodes, focused on the fresh-out-of-college Abhishek Tripathi (Jitendra Kumar). His government job takes him to a small Uttar Pradesh village Phulera as Panchayat Sachiv. The city boy struggles to settle in a village with its drastic change of pace, power cuts and a different socio-economic reality. He focuses his attention on passing CAT exam so that he could flee Phulera. In his journey, he is joined by Pradhanji (Raghubir Yadav), his wife Manju Devi (Neena Gupta), who is the real pradhan, grams of sevak Vikas (Chandan Roy) and up-pradhan Prahlad (Faisal Malik). All of them together make his life easier, and by the eighth episode, Abhishek is finally settling in at Phulera.

Cut to season two, where, in the early scenes, Abhishek is grinning while getting work done from the laborers in Phulera, clearly hinting at him acclimating to the village life. Through an exquisite grip on the story, writer Chandan Kumar and director Deepak Kumar Mishra’s subtle handling of the lives of inhabitants of Phulera very much propels the lived-in feel of the show.

In one instance, when his guests insist that Pradhan Ji (Yadav) should also eat the dessert at his daughter Rinky’s birthday party, he responds, “Abhi toh bohot bachaa hai, hum toh subah bhi ye hi khayenge (there is a lot left, I will have to eat it in the morning also)”. This reminded me of times when I got to eat the leftover food from a party at home until it got over or stale. Another hilarious and relatable moment is when one of the characters sits on his scooter only to immediately jump up as the scorching sun has turned it into a saucepan. How could you not relate to it while living in Delhi’s 49 degrees temperature?

The creators of Panchayat 2 have projected Indian hinterland like nothing we are accustomed to see on screen. It is no Mirzapur with its guns and gangs, neither are you greeted by our hero and heroine are dancing in sarso ke khet. Instead, it’s a village dealing with relevant issues like open defecation, alcohol addiction and installation of CCTVs, but with a dash of humor.

The one spearheading these issues is Abhishek, who has no plans of bringing about big changes in the village, but is only bound by duty and doesn’t want to be reprimanded by his senior. He looks into the matter of open defecation only when he is alerted about a ‘surprise’ inspection. This typical administrative approach of a government employee is not new to Indians. Jitendra Kumar as Abhishek is brilliant. He portrays the frustration of an aspiring youth stuck in the wrong place and the concerns of a goodhearted human, in equal amounts. Kudos to the creators for not giving us an ‘aadarshwaadi‘ government official, as we are not habitual of having one.

Besides Jitendra, the entire cast, including actors Chandan Roy, Faisal Malik, Sunita Rajwar, Durgesh Kumar, and Shrikant Verma, has taken a well-written, crisp, and a simple yet charming script, a notch higher with their towering performances.

Among all of them, the real scene-stealer is Manju Devi, played by a perfectly cast Neena Gupta. She, despite being the village pradhan is happy catering to her to-do list as a housewife. Her husband Brij Bhushan Dubey (Yadav, another actor par excellence) is the de factor Pradhan here. But that does n’t mean she is incapable of taking on her official duties, or she is happy to follow her husband’s every command. 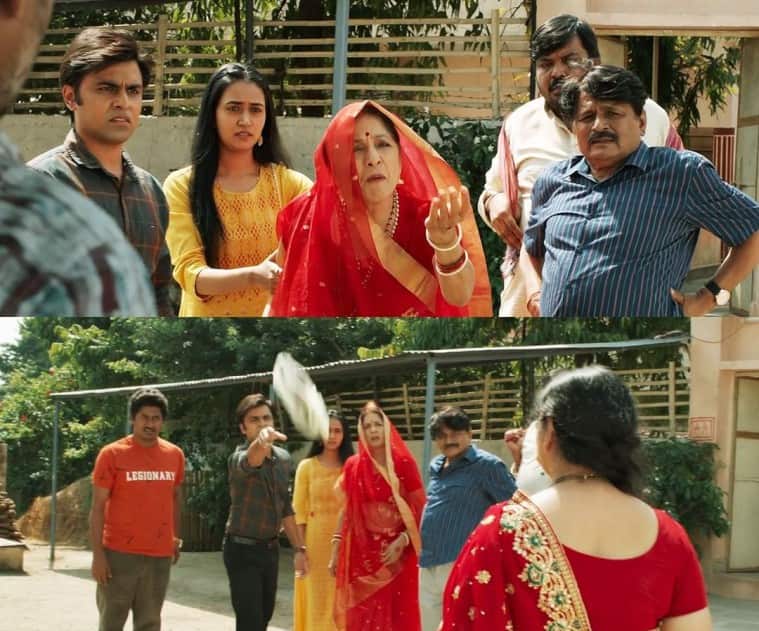 It is fascinating how she does what she feels is right, whether it is finding a groom for her daughter or negotiating the price of mud as the village pradhan. At one moment, she even tells Brij Bhushan’s friend, who has come home, to pick up the plate he has eaten in and keep it away. She is not even afraid of the callous MLA who insults her husband and others close to her and shows him his place in her inimitable style. It’s good to see Gupta getting more screen time this season, for she brings so much rawness and nuance to her performance.

The only hiccup comes when the narrative meanders to a tragedy-struck Prahlad in the last episode. But it can be overlooked in front of the nourishing experiences that the show gives us to cherish. The strength of Panchayat 2 lies in how it never takes itself too seriously and slips into the situational comedy effortlessly.