A producer on Netflix’s latest hit show 1899 has hit back after accusations the series plagiarized a Brazilian graphic novel.

The author Mary Cagnin, from Sao Paolo, took to twitter after the show was released on the streaming platform last week, saying she was shocked to see that 1899 features imagery very similar to a 2016 graphic novel Black Silence.

The show, which tells the story of a group of migrants traveling to Ellis Island aboard a steamboat in 1899, features the same triangle theme throughout the episode, similar to illustrations in her novel.

Mary also accused the Netflix show of ripping off details from her own story, including the deaths of some of her characters. She claims that Netflix did not contact her about using her artwork without permission.

However, several people who watched the show and read her novel said that the pyramid and triangle theme is where the similarities between the two stops.

In a now deleted post, producer Jantje Friese defended 1899 against the claims on Instagram, saying Mary was ‘crying wolf’ and that the series was not based on any pre-existing material.

The author Mary Cagnin took to Twitter after the show was released on the streaming platform last week, claiming she was shocked to see that 1899 featured imagery very similar to her 2016 graphic novel Black Silence (right) 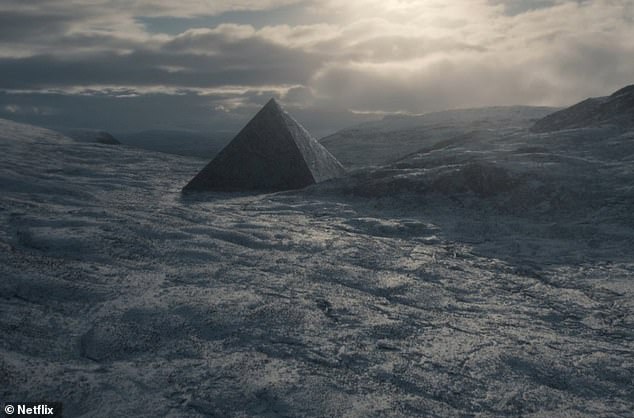 The show, which tells the story of a group of migrants traveling to Ellis Island aboard a steamboat in 1899, sports the same triangle theme throughout the episode that is similar to triangles that appear in her novel and showcases an eerie black pyramid 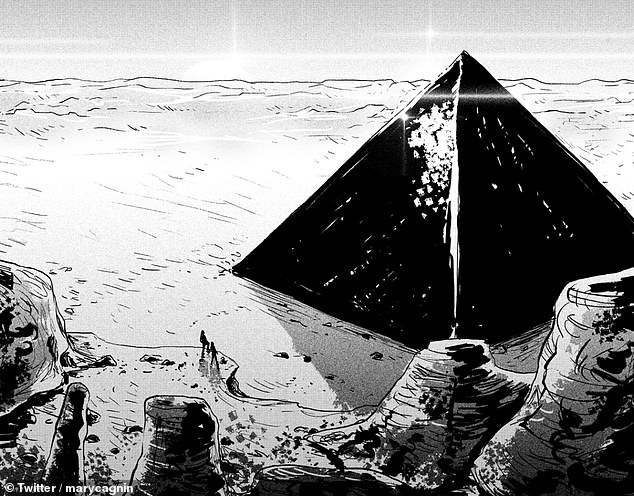 The black pyramid Mary drew for her graphic novel, which was published in Brazil in 2016

Mary took to Twitter last Sunday to share her shock after 1899 was released on Netflix last week.

‘I’M IN SHOCK. The day I found out that the 1899 series is just IDENTICAL to my comic Black Silence, published in 2016. Follow the thread, ‘she said, before listing several examples she felt proved her point.

‘It’s all there: The Black Pyramid. The deaths inside the ship/ship. The international crew. The apparently strange and unexplained things. Symbols in the Eyes and When They Appear,’ she went on.

She shared a screenshot of her own graphic novel next to some of the advertising material for the Netflix show, pointing out that 1899 characters have the same triangle-shaped pupils that her characters sport in her novel. 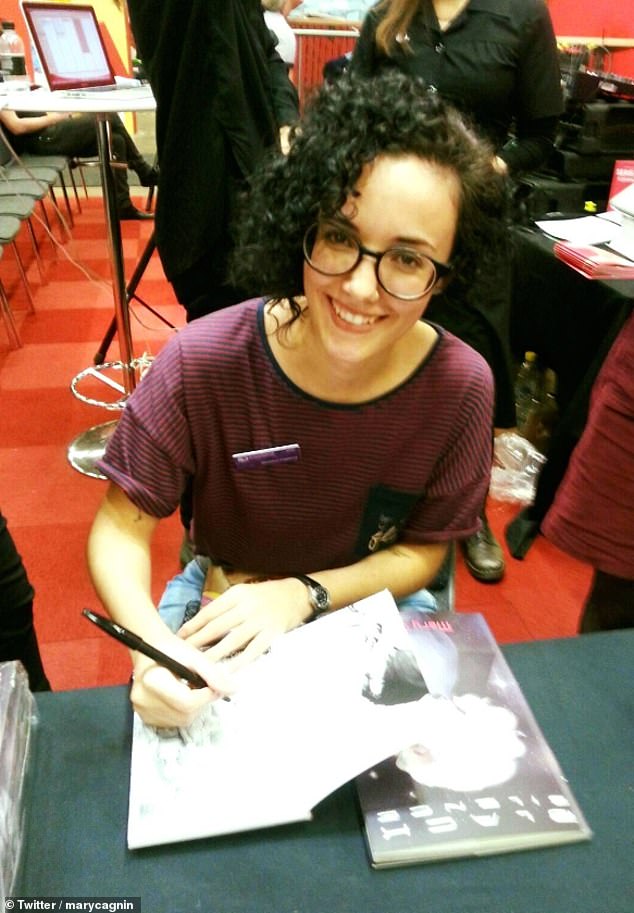 Mary said she advertised in Europe at a book fair in Sweden in 2017, where she brought the manuscript and its English version with her 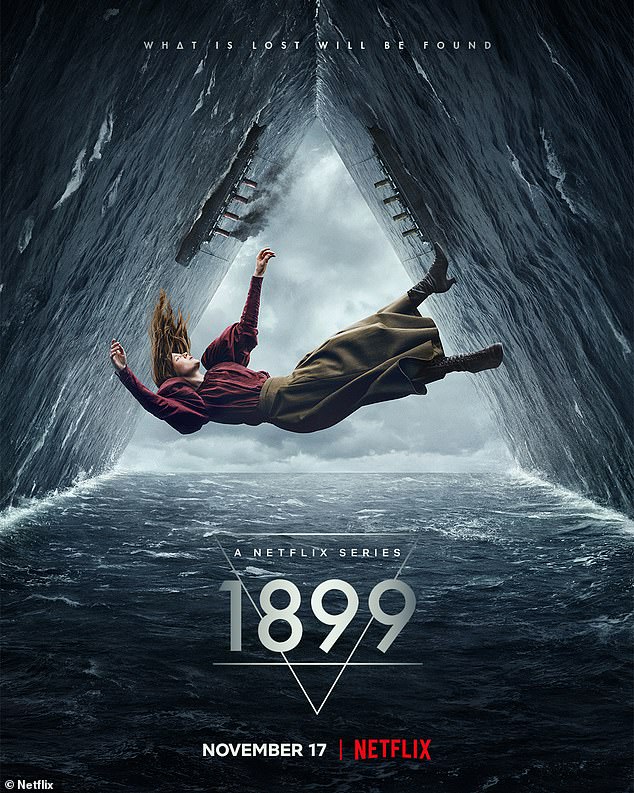 1899 was an instant hit with viewers when it was released last week, but is now the object of the plagiarism controversy

She also referenced the appearance of an eerie back pyramid in 1899 which again is similar to a black pyramid appearing in her novel.

Mary also felt that Netflix copied some subtle plot details appearing in her work, regarding the backstories of some characters and their families.

The author claimed that her original idea could have been circulated at the 2017 Gothenburg Book Fair in Sweden, where she distributed the manuscript and its English version to several publishers and other attendees. 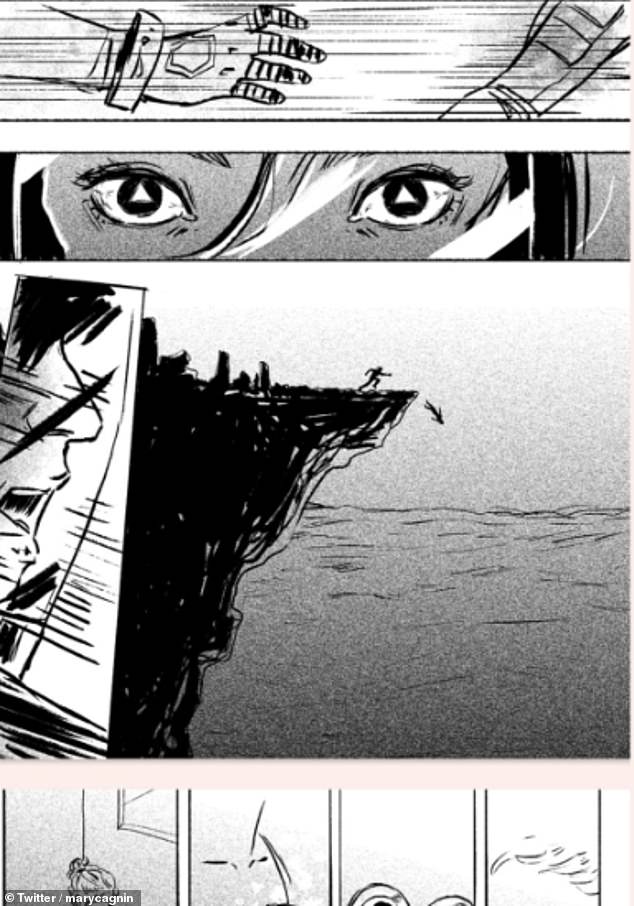 The author shared screenshot of scenes from her graphic novel that she feels were similar to the Netflix show, including a character plummeting to their death

A character also falls to their death from the steamboat in Netflix’s 1899, which was pointed out by Mary and her fans

The author added she was ‘heartbroken,’ believing her work was used like this, and that she ‘cried a lot’ over the issue.

She went on to say: ‘Black Silence is a short work, almost a short story. It is very easy, in 12 hours of projection of the series, to dilute all these “references”, but the essence of what I created is there.’

Her thread has been shared by fans of her work on the social media platform, with many feeling the similarities between her work and the Netflix show ‘are not coincidental.’ 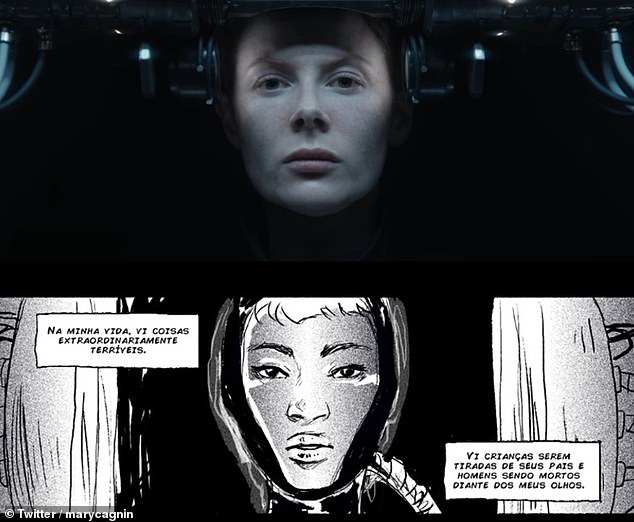 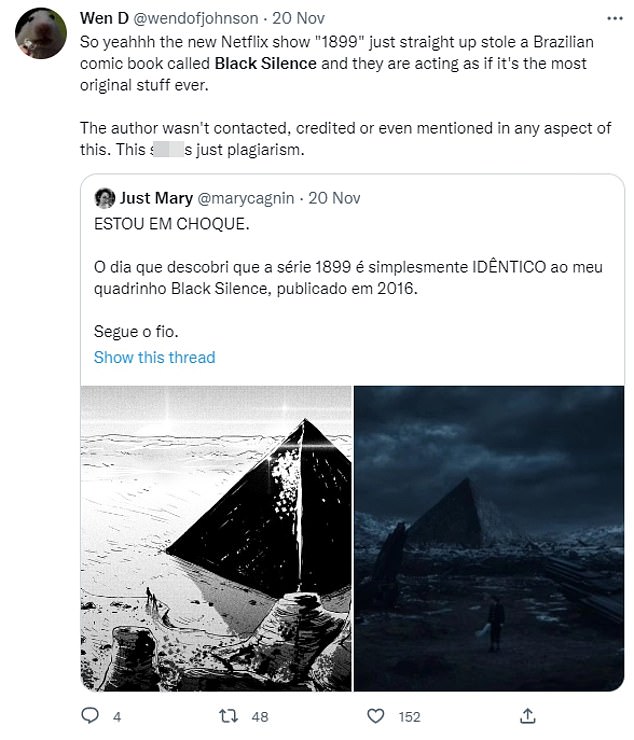 Fans shared Mary’s claims on Twitter, saying there are too many similarities between the two works to be a coincidence

Meanwhile, 1899 producer Jantje Friese addressed the claims on her Instagram account, which has since then been deleted.

She wrote: ‘A Brazilian artist has claimed we stole from her graphic novel. To make it clear: we did not! Until yesterday we weren’t even aware of the existence of that graphic novel.

‘Over two years we have put pain, sweat and exhaustion into the creation of 1899. This is an original idea and not based on any source material. Nevertheless we’ve been bombarded with messages – some of them ugly and hurtful.

‘Someone cries wolf and everyone jumps on it, not even checking whether the claims make any sense.

‘Of course should this be a scheme to sell more of her graphic novels: well played,’ she added.

Several people on Twitter also took the show’s defense and claimed that the plot of Black Silence and 1899 were widely different.

‘There is no Kerboros ship in Black Silence. There is no discussion about the human mind/reality,’ one said.

The same person claimed Netflix approved 1899 in February 2016, which was not confirmed.

‘I can’t believe 1899 is being accused of plagiarism. The other story, “Black Silence” is literally a generic “crew paranoia” “scifi spaceship story in the vein of Event Horizon or Sun, that happens to include a pyramid. one of the main themes of 1899 are touched on,’ another said .

‘You all should read the comic and watch the show before making any conclusions. This comic isn’t about a simulation or ships at all. And 1899 has mentioned no aliens yet,’ one said.

‘So many people are quoting the tweet about 1899 and Black Silence claims they plagiarized her story and… no actual evidence besides a couple comic panels Just from the summaries the stories are wildly different,’ another wrote. 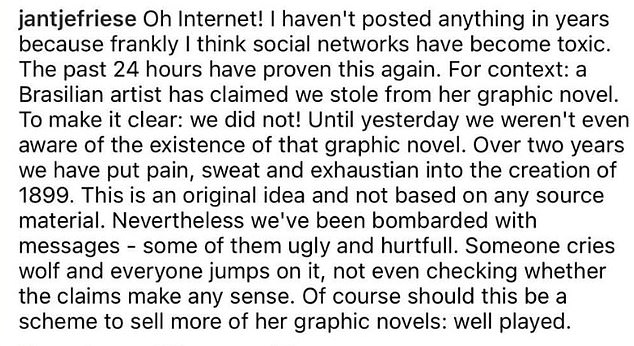 Janjte Friese, who produced 1899, defended her work on Instagram and said the series was an original idea based on no source material