Osbourne shares via Instagram that Aimee and her producer survived the Thursday night fire, escaping with injuries, per media reports.

A structure fire at a Hollywood recording studio hit too close to home for Sharon Osbourne, who shared the Los Angeles Times story while revealing that her daughter Aimee was one of the fire’s victims.

According to the Times, one person died in the fire while an additional two were injured. Taking to her Instagram early Friday morning, Osbourne shared that the two who survived were Aimee and her producer.

“Today my daughter @aro_officialmusic was working in a recording studio at this building with her producer,” Osbourne wrote, captioning an image of the LA Times story. “They are the lucky two that made it out alive.”

Waiting for your permission to load the Instagram Media.

Per the news report, the survivors smoked out exposure during the fire that broke out Thursday night. They reportedly declined to be taken to the hospital.

“It is utterly heartbreaking that someone lost their life today in this fire & we are sending our prayers to this person & their family,” wrote Osbourne. “What happened today was beyond horrific.”

The blaze occurred at a two-story industrial building that holds several recording studios. The cause of the blaze remains under investigation by the Los Angeles Fire Department’s arson investigation team. 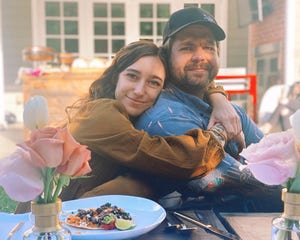 Despite the ongoing investigation, Osbourne wrote that she hoped “buildings like this are better regulated for fire safety” in the future. While firefighters said the building was not fully occupied, Osbourne noted that “Producers, musicians, mixers & artists also lost all of their equipment.”

Aimee is the eldest and more private of Ozzy and Sharon Osbourne’s three children together. She famously declined to be a part of “The Osbournes” reality show that made stars of the rest of them.

Her relationship with her entire family has been complex and at times strained, with her speaking openly at times about not appreciating some of the antics of her parents and siblings on television.

Aimee performs and records music under the moniker ARO, her initials. Her she music production has been slow and sporadic, but she recently she told Rolling Stone she is trying to muster up the courage to release an extensive library of songs she’s already recorded.

Each latest track, “Against Mine,” was released last month. It is the first song released in a year and only the fifth on the page, which has been live for seven years.