Texas toddler orders 31 cheeseburgers and mom had no clue

One Texas mom got quite a surprise when she was delivered 31 McDonald’s cheeseburgers after her 2-year-old son accidentally ordered them on DoorDash.

Kelsey Golden, the mother of Barrett, who she affectionately called “cheeseburger boy” during a chat with FOX TV Stations, said her son loves to look at his reflection on her phone.

“So I was getting the phone and I was transferring the pictures from my phone to the computer and any time I have my phone out, or my computer out, Barrett just dashes right to it,” Golden explained.

Barrett Golden sitting on a table with his 31 cheeseburgers. (Kelsey Golden)

Golden works at her two eldest children’s elementary school and was tasked with putting the yearbook together.

As Golden worked away, Barrett took the opportunity to play with his mother’s phone, plus it gave her some reprieve from childrearing to work on her project. 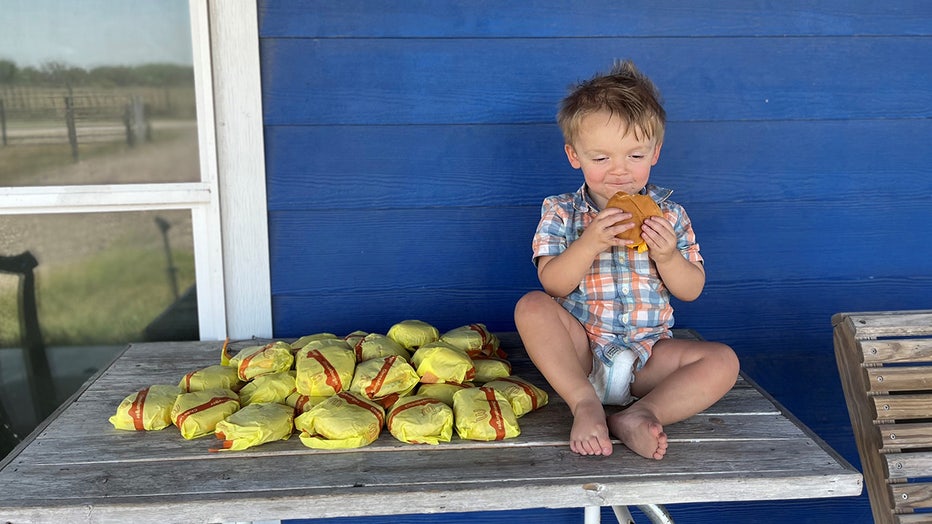 Barrett munching on one of 31 burgers he accidentally ordered. (Kelsey Golden)

“He really likes looking at his reflection so I thought, well, you know, it’s keeping him quiet, so I let him watch his reflection,” Golden said.

She put her phone on camera mode to give her toddler something with which to distract himself.

In the moment, Golden assumed her phone was still in the locked camera mode but little did she know, it was not and her son had free reign over his technologically advanced toy.

Golden said since the school year was coming to an end and she had been very busy with her projects, she had gotten into a convenient habit of using DoorDash to send McDonald’s over to her children’s elementary school.

And since she was already physically there, she could just pick up the order and deliver the food to her kids during their lunch hour.

So when she received a text message on May 16 letting her know her order was running a tad late, she didn’t think too much of it.

“So I texted my admin that I work with and said, ‘Hey, DoorDash is on their way with McDonald’s, will you make sure the kids get their Happy Meals?'” Golden said. 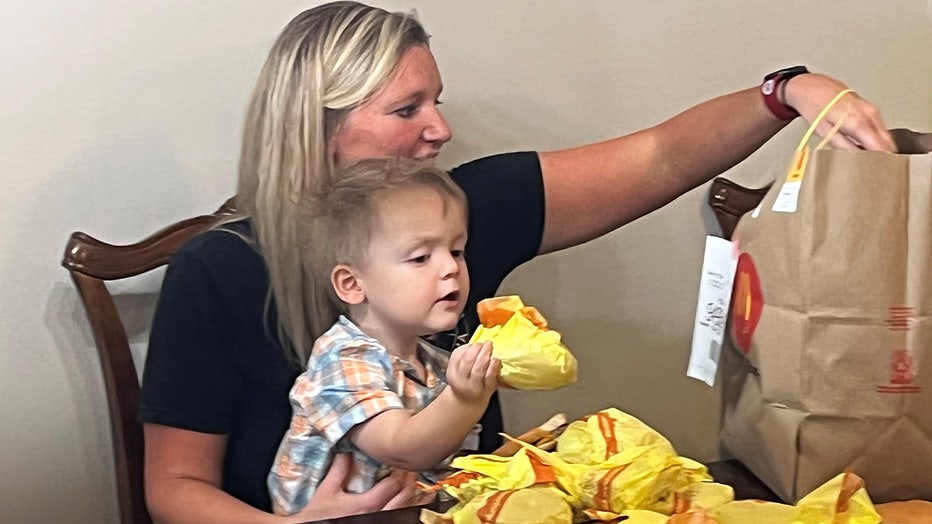 Kelsey Golden and her son, Barrett, 2, with his 31 cheeseburger order from DoorDash. (Kelsey Golden)

Not long after, however, Golden said she received a text from her co-worker telling her the order never arrived and that in fact, her kids came to school with a packed lunch.

“And I was like, that’s weird. And then right after that, I got a knock on the door, and I go and answer it and it was this girl. She said, ‘Your 31 cheeseburgers?’ And I think I stared at her for this awkward 15 seconds because I was trying to process everything,” Golden said.

She started running scenarios in her mind as to why she was just delivered this hefty helping of hamburgers with cheese. Could it be a prank? Was this delivered to the wrong house?

Golden decided her second guess was the correct one and asked the Dasher the name for the order, to which the Dasher answered, “Kelsey Golden.”

“So then I just took the burgers because I didn’t know what to do at that point,” Golden explained. The Dasher politely told Golden, “Have a good party,” before leaving.

It didn’t take Golden long after to realize her last must have accidentally ordered the 31 cheeseburgers.

“It’s actually not the first time that he’s done this,” Golden said. When Barrett was one, Golden recalled having her phone on the armrest of her sofa and her last kept tapping the phone screen with his open hand.

“You know how on Facebook, it has friends you may know because they’re friends with your friends? So he was clicking on them, like adding all of them,” Golden said.

“So, I posted on there, and I was just trying to be funny with it and I was like, ‘Attention Kingsville/Ricardo community, I have 31 free cheeseburgers from McDonald’s. Apparently, my 2-year-old knows how to order DoorDash,'” Golden said.

Someone from that community page shared the funny post with a local news station, and then Barrett’s little mishap went viral.

“Once Corpus Christi got a hold of it, I feel like I went to sleep and I woke up and it was going to states and states,” Golden said.

She started seeing the story on Australian news outlets and even in India.

“I thought people would think it was funny,” Golden said. She will continue to let her toddler enjoy seeing his reflection on her phone but next time, she will double-check to ensure he does n’t order another 31 cheeseburgers.

This story was reported out of Los Angeles.