Welcome back to the latest edition of our daily WWE Rumor Roundup. Stephanie McMahon is the most trending name in professional wrestling as the promotion’s Chief Brand Officer (CBO) announced that she is taking a leave of absence.

However, who has been picked as her replacement? The rumor roundup has all the details.

Elsewhere, it has been revealed that a promising prospect was slated to join Edge’s Judgment Day stable before his release. The real reason behind his exit has also been covered in today’s lineup of stories.

We ended the WWE Rumor Roundup with backstage notes on the company not punishing a top name due to fears of her possibly going to AEW.

#one. Nick Khan will take over Stephanie McMahon’s duties

As announced by Stephanie McMahon, the veteran superstar will take a break to spend some time with her family. While Stephanie is expected to return, the promotion has already found her short-term replacement in Nick Khan.

Khan, WWE’s President & Chief Revenue Officer, will also oversee Stephanie McMahon’s responsibilities until she is ready to return to work.

Brandon Thurston of Wrestlenomics reported that WWE’s business partners have already been informed about the change. He tweeted the following update:

“Nick Khan will be taking over most of Stephanie McMahon’s duties in her absence, according to multiple people at WWE. Select business partners have already been informed.”

Nick Khan will be taking over most of Stephanie McMahon’s duties in her absence, according to multiple people at WWE. Select business partners have already been informed.

Nick Khan will be taking over most of Stephanie McMahon’s duties in her absence, according to multiple people at WWE. Select business partners have already been informed.

Rumors state that the talent did not know about Stephanie McMahon’s planned hiatus until her announcement.

Dave Meltzer also clarified that Stephanie McMahon herself decided to take some time off and was under no outside pressure to make the decision. In case you missed it, here’s Stephanie McMahon’s official statement on her immediate future.

#2nd. Reason Parker Bourdeaux was released despite plans for him to join Judgment Day

The WWE departure of Harland, aka Parker Bourdeaux, shocked many fans as he was tipped to have a bright future in the company.

In this week’s Wrestling Observer Newsletter, it was confirmed that Edge wanted Bourdeaux to be Judgment Day’s fourth member. The massive plan was reportedly kept a secret behind the scenes as even Parker wasn’t aware of the same.

Meltzer revealed that WWE released Harland after they “found out something” about the young star. While the findings haven’t been disclosed, they could most likely be related to a controversy from the past.

Here’s what was reported in the Newsletter:

“The only thing we were told as to why it didn’t happen is that the company found something out about Boudreaux and made the decision based on that,” noted Dave. “The other reason is because of the feeling in NXT that he had stopped improving, and he got a tag of getting hurt too much early on.”

We should ideally get to know the real reason behind Parker Bourdeaux’s release sooner rather than later. however, it’s unfortunate that he missed out on the chance to be a part of Edge’s new stable.

#3. WWE didn’t suspend Charlotte Flair as they were concerned she’d sign with AEW 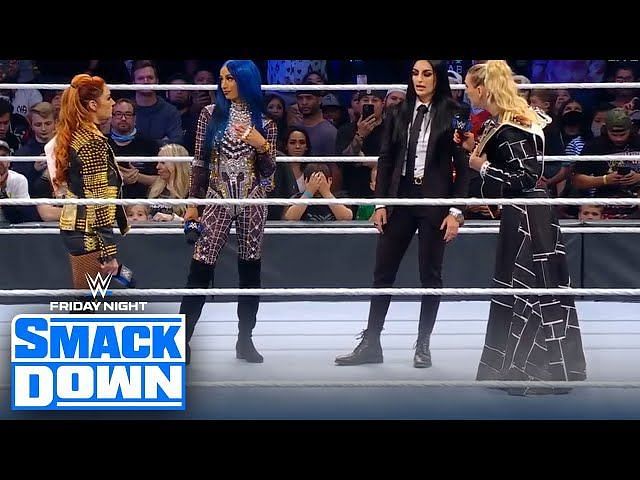 Fans will undoubtedly discuss Charlotte Flair and Becky Lynch’s real-life feud for years to come. The top female stars infamously participated in an uncomfortable segment on SmackDown, where they were supposed to exchange the women’s championships.

Charlotte Flair allegedly went off script and was later sent home from the show. WWE, however, chose not to make an example out of Flair and did not punish the Queen for her actions.

Dave Meltzer revealed that high-ranking officials feared that Flair would go to AEW. It was stated that Vince McMahon and his team might have similar concerns regarding Sasha Banks and Naomi.

“We were told at the time the decision was made not to punish her or get rid of her because they didn’t want to hand Flair to AEW. With Naomi & Banks, even though neither is pushed at the level of Flair, the idea may be the same,” wrote Meltzer.

Sasha Banks and Naomi have attracted the spotlight for all the wrong reasons, and multiple angles of the trending story have been dissected online by fans. However, could the tag team’s issues with WWE result in them leaving for AEW? Only time will tell.

Is Roman Reigns vs. The Rock likely to happen? We asked Paul Heyman himself here.